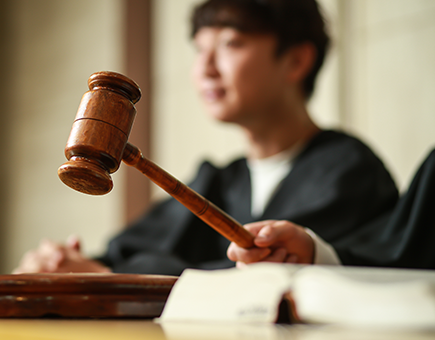 As the only national college of law in Geyongsangnam-do Province, the subjects in the college curriculum are as follows: Basic laws such as Constitution, Civil Law, Criminal Law, and Commercial Law; procedural laws including Administrative Law, Labor Law, Intellectual Property Law, Civil Procedure Act, and Criminal Procedure Act, etc. Its courses are established to train students to become legal experts. In particular, the corporate trade sector is characterized through the connection with the local industries in the region to assist graduates in finding employment. Through the accumulation of research results, the College of Law strives to be appointed as the designated Law School.
In addition, the “Daekyung Academic Hall” is equipped with large-scale international conference rooms, state-of-the-art lecture rooms, and reading rooms that can accommodate a large number of people. Various kinds of scholarships, such as the “Kim Soonkeum Scholarship Foundation of Gyeongsang National University” founded with KRW 6 billion and the “Scholarship of the College of Law Foundation” are granted to students. The Law Research Institute linked to the College of Law is exerting great efforts for the establishment of a proper legal culture and development of the local community, such as research in the field of law, providing residents with legal counseling.
In 2014, it was selected and included in the Project to Characterize Local Colleges ( ENA Public Expert Training Project) and in 2019, in the Project to Characterize Colleges ( Dandi Public Expert Training Project), granting scholarships and subsidies to students for academic travel at home and abroad and attendance in local and overseas contests. In 2021, the College participated in the Key College Project to Foster Experts of Intellectual Property, which offers many diversified benefits to students.
Professors of the College of Law act as examiners for the Examination for Higher Ranking Administrative Officers, various exams for civil officials, and qualifying exams as well as being widely known in academia for their research achievements and published writings. The Law Research Institute has been publishing in academic journals and executing academic activities both domestically and abroad to expand its reputation as a key national university in Geyongsangnam-do Province. Meanwhile, some of the alumni who have advanced into society since 1984 are working as the key members of the National Assembly, the court of law, prosecution offices, government administration agencies, and other numerous areas to enhance the prestige of the college and encourage their juniors.